Is AI the Right Solution to Your Business Problem? Part 2 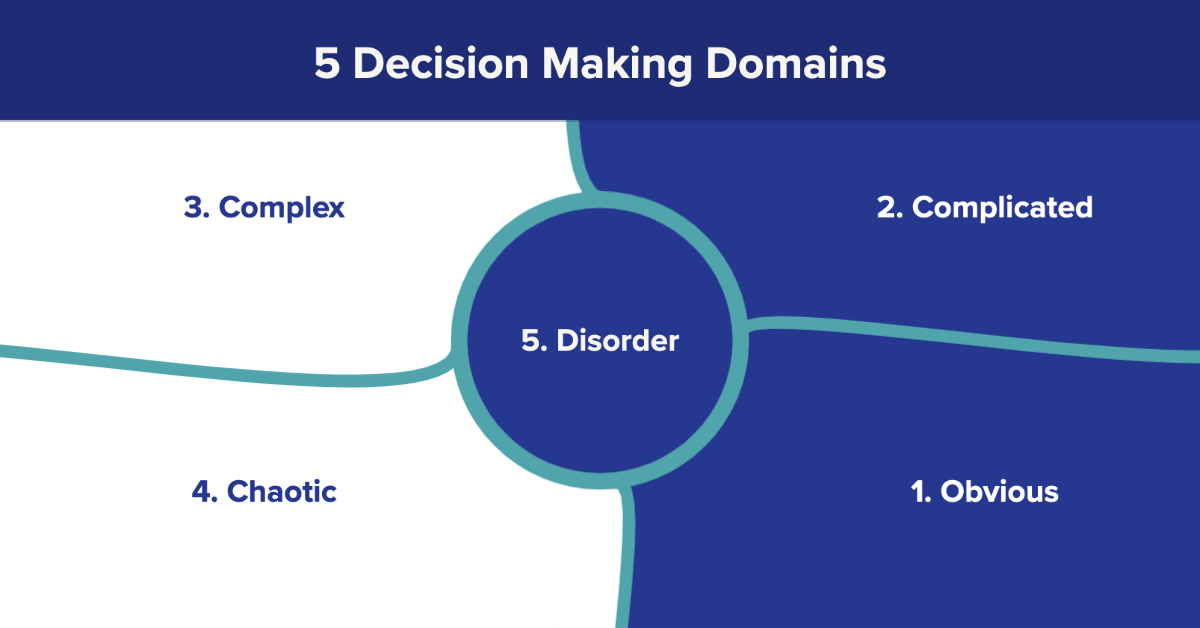 In the first part of this three-part series, we discussed classifying business problems according to their complexity and the obvious and complicated domains. In this second part, we’ll discuss the realms of complex and chaotic issues. The following table displays the five problem types, their respective domains, and examples.

As discussed in part 1, the problem types become increasingly disordered as we read the table from top to bottom and require more robust solutions to match.

Where predictions of business information in the future are concerned, we must consider the realm of increasingly disorderly problems. In contrast with complicated issues, where one at least correct answer exists, in the complex domain, managers struggle to ferret out correct answers in a world that is often puzzling.

Compare, for example, a Tesla with the weather. Even though a Tesla is a complicated machine, an excellent mechanic could take apart and reassemble it without changing anything. This vehicle is the sum of its parts. In contrast, weather patterns are far more than the addition of their parts—also recognized as the term “unknown unknowns.” In the 21st century, much of business understood today has shifted into this category.

Enter the land where things are in constant flux and unpredictability for any of several reasons. Did your organization have a bad quarter? Was there a management shift? Was your company merged or acquired? In such environments, leaders can conduct experiments and obtain information to help form instructive patterns—however, such investigations must be minor, contained, and “safe to fail.” Patience in these instances will allow the path forward an opportunity to show itself. Hence, to solve complex problems, experiments and sensing must occur—before recording a response. In such problem-solving situations, leaders and their teams often find more success when working in conditions of scarcity rather than abundance. Moreover, their results under such conditions are more creative.

Here’s an example of a complex problem involving YouTube. YouTube’s founders could not have predicted the plethora of streaming video tech options existing today. However, they provided an environment in which people had the chance to use YouTube creatively. Then, emerging patterns of use could be supported and augmented. Over time, YouTube became a platform for expressing a variety of views, even political ones. As a result, YouTube built on this pattern, sponsoring presidential hopefuls’ debates and offering video feeds from their site.

What challenges do leaders in the complex domain face?

Leaders facing complex problems may succumb to the temptation of more traditional command-and-control styles of management. They may demand defined outcomes emerging from fail-safe business plans. Complex domains require a more experimental mode of command, and managers may not be patient with such an approach. Since this approach requires a certain amount of failure, risk-averse or failure-intolerant managers may find such suggestions challenging to tolerate. Failure is a critical aspect of coming to a practical understanding. If leaders attempt to overcontrol the process, they will miss the opportunity for such informative patterns to reveal themselves. Leaders with tolerance for such approaches will capture opportunities for new business models, creativity, and innovation.

The chaotic realm, as its name implies, is even more disordered than the complex one. There are no correct answers, so don’t even try searching for one. You will find lots of turbulence and many unknowables. Think of the aftermath of September 11, 2001, as an excellent example of a chaotic problem, one where causes and effects shift constantly.

Leaders in the chaotic world must apply a tourniquet to the bleeding. Actions take precedence over anything else to create immediate stability. Once you achieve stability in a system, the situation can be transformed from chaos to complexity. Top-down and broadcast communications are essential in such cases because there is no time to ask for any inputs.

Unfortunately, managing a crisis can devolve into a recipe, which is an error some leaders may make. On September 11th, the mayor of New York City was very effective, despite the various chaotic conditions. He took action and issued directives. Nevertheless, the top-down leadership style that was so effective during the crisis was not as helpful when applied to the mayor’s general role after the immediate crisis had passed. Rudy Giuliani was not able to change his management style to suit the emerging problem at hand. He suggested, for example, to postpone elections to maintain stability and order—an example of something which may not have been necessary under the circumstances.

What challenges do leaders in the chaotic domain face?

It’s often the case that managers who do well in chaotic situations can become over-confident. Some even generate adoration that borders on cult-like behavior. The resulting leadership problems are problematic since supporters often blindly follow and, more importantly, stop providing the leader with correct information. Nevertheless, managers have ample opportunity to lead through innovation in the chaotic domain. Generally, in the chaotic realm, followers are open to directive leadership and novel solutions. Some experts recommend managing innovation and chaos in parallel. Managers can have two separate teams, each focused on opportunities for doing things differently and managing the crisis, respectively. Seize the moment rather than waiting for the situation to wane.

In the final part of this series, we’ll discuss the highly disordered domain and the value of using user experience research, design, and data science to simplify complex problems.

What kind of business problem do you have?

Understanding the type of business problem you have is only the first step. Contact our team to help decide if AI and machine learning are needed to solve your business’s issues.