Everything we interact with daily is becoming more and more connected with each other. Our interaction jumps from our phones to our cars, from our cars to our homes, our homes to our tablets, etc. We now expect our experience to be consistently usable and delightful across all our devices.

The most important thing to keep in mind when designing both iOS and Android versions of an application is that the interface elements of both platforms are not the same and cannot be designed using a “one-size-fits-all” mindset.

It is important that we create experiences suited to the context in which the devices are being used. We must consider features that make sense to the situations of use. For instance, users do not typically use their phones to watch movies, nor is it common to use a television to look up map directions. We need to remember the primary user goals when we design for all the devices we use in our everyday lives.

Smartphones have small screens and are used on-the-go. They are mainly for completing quick tasks, locationally-aware actions such as finding directions, social interaction, and other forms of mobile entertainment. On the other hand, tablets are used more for reading or viewing content. The screen size is great for content consumption. Due to this format— larger than a phone but smaller than a computer—we find that tablets are used mostly as an easily accessible desktop-replacement, which means more freedom for longer interactions. We need to design for each of these situations accordingly.

The two major mobile operating systems, iOS (Apple) and Android, currently dominate the mobile market share. There is an increasing demand for apps to be developed for both platforms to reach the most users. Adapting an iOS app for Android (or vice versa) is not as simple as porting the same design. There are many differences between how users interact with apps on each OS that a designer needs to consider.

Phone vs. Tablet vs. Watch

With the rumors of the iWatch and the release of multiple Android wearables, we start to question where the line is between devices. Taking into account the context of use that I mentioned earlier, we need to decide:

For example, Eat24 has a wonderful app for finding and ordering food nearby. The phone application’s primary focus is ordering food "now". We use our phones when we are on-the-go and hungry. The iPad app’s focus is browsing new restaurants. This would be typically used when casually making dinner plans for another day. The watch app would be used when someone like David Singleton decides to show off ordering pizza on stage at Google I/O. The goal of the watch app is to order pizza quickly and know when the pizza will arrive just by glancing at your wrist. 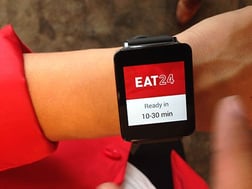 No matter what, the same application across multiple devices should have the same general look and feel. We should design for the device, without sacrificing consistency in the brand. Typography, colors, iconography, and imagery should be similar enough to create the feeling of a set. Branding an application is much like branding your company—when users see and interact with your app, we want them to know (and feel) immediately who we are and what we do.

Why Should We Use an Actual Device for Testing Mobile Apps?